I went to Seattle again to visit my brother, the one who is recovering from chemo. I am so very very very VERY VERY VERY happy to report he is looking healthy again. He has color back in his face, a little roundness to his cheeks, and his eyebrows have grown back. It’s amazing what a difference eyebrows can make. Who knew how those little patches of hair could influence whether you look like you’re alive or one step away from death! I stayed a few extra days to help with the kids who had shorter school hours this week. I picked up the two youngest ones from the bus stop and took them on an afternoon hike in the foothills of the Cascades. Now, I thought I might have to coax them up Tiger Mountain, a 2,300 foot climb, with bribes of treats, but instead the two of them, ages 9 and 10, decided they would run up the mountain. RUN! Those young and athletic little shits! So it was me that had to bribe myself as I tried to catch up with them. “If I make it to the top I will…pant pant….reward myself…pant pant…with pie!” I mumbled aloud.

When I finally reached them at the summit — she was lounging like a little lizard in the sun on a flat rock while he was engraving his name on a log — they chimed, “Hey, Aunt Beth! What took you so long!”

Six point two miles and two and a half hours after we started, we returned to the car. They both fought off sleep as I drove us a few miles further up the highway to the town of North Bend. It was half way up the mountain hike, during a moment of sweaty, near-hallucinatory fatigue, that I remembered something about a nearby diner that had been the setting for old TV show.

“But we want milkshakes, Aunt Beth,” came the chanting from the back seat.

“Yes, I’m sure they have milkshakes too. It’s one of those old-fashioned diners,” I replied, mindful not to add, IF the place is still there. 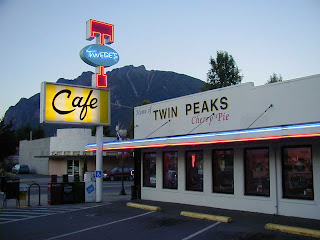 Yes, the pie diner is still there. It’s called Twede’s now. It still has a wall of memorabilia with the Twin Peaks actors’ autographed headshots (presumably copies of the originals, replaced after the diner burned down 10 years ago) and it still has pie on the menu. After some negotiating and compromising, we ordered two extra-thick strawberry milkshakes and a slice of boysenberry pie. 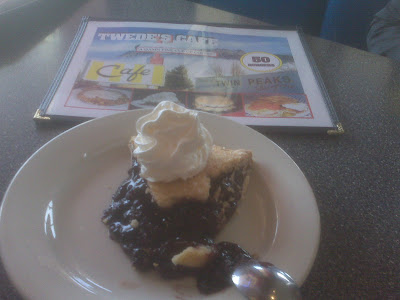 I cannot say I was impressed with the pie — its filling was somewhat goopy and obviously reheated in the microwave– but the milkshakes were fantastic and, anyway, it was still a sweet reward for our accomplishment. I mean, how else does one gain satisfaction from this torturous life other than achieving small but doable goals and rewarding ourselves for them. I just wonder, though, that if my goal was a tiny little mountaintop and my reward was a piece of mediocre pie, how will my brother reward himself for beating cancer and getting his health back. He will need to think of something bigger than pie! Maybe for now having a clear MRI is reward enough. That and getting his eyebrows back.

I paid the check and smiled as my still-energetic niece and nephew bounced their way back out to the car. My belly full and my calves tight, more chanting came from the back seat as we drove past a looming peak with a patch of snow on top — it was Mount Si, Tiger Mountain’s big brother, and it boasts a monster of an 8-mile hiking trail.