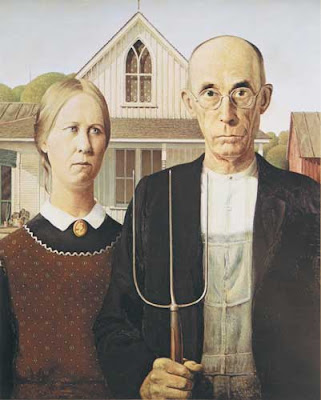 Sometimes you come to a fork in the road where you are forced to make a decision about which way to go, and the direction you choose can forever change your life. When I met Marcus in 2001 I was on a road trip from California to Oregon and saw a sign for Crater Lake National Park. Should I stop and have a look at the volcanic lake or keep going to Bend? I made a split second decision to stop at the lake. And there he was, that handsome German with almond-shaped green eyes, a seductive British accent and those odd but elegant Haferl boots that laced up the sides. I was smitten, gave him my number, and, subsequently, my life took an unexpected but exciting new path that led to moving to Germany to marry him.

I reached a lot of forks in the road during our marriage, making decisions about which direction to go at these various junctions, some that worked out well for us and some that turned out to be rocky paths that I am still working hard at forgiving myself for choosing. How do we ever know which is the right way? We can only follow our instincts, sometimes let the steering wheel determine the turn at the last second and, by God, hope for the best.

During my tour of Southeast Iowa last week while visiting my childhood homes I came upon another one of those forks in the road — a pitchfork, as it turns out — when I saw a sign that read “American Gothic House, Six Miles.” The house from Grant Wood’s classic painting! I grew up less than 20 miles from this famous place and never knew it was there! Unlike my Crater Lake decision my direction was more certain this time. I wanted to see this house. I slowed down, turned right, and headed down a two-lane highway to the tiny town of Eldon, Iowa, population 967. 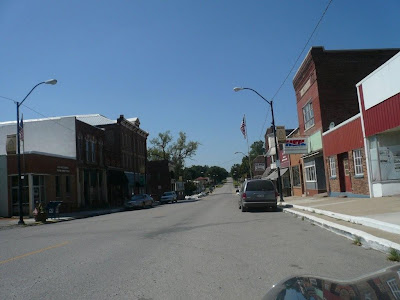 You have to weave through the tiny, residential streets of Eldon to reach the iconic house, which was built in 1881 and is listed on the National Register of Historic Places. Once you pull up the country road you recognize it off in the distance at once. It’s an adorable, funky farmhouse, a place that begs to have someone bake pie in it! Once again, I was smitten. And smitten, as I have learned, can be a dangerous, life-changing word. 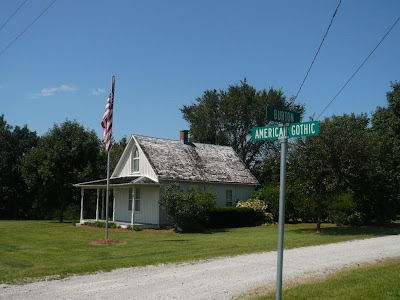 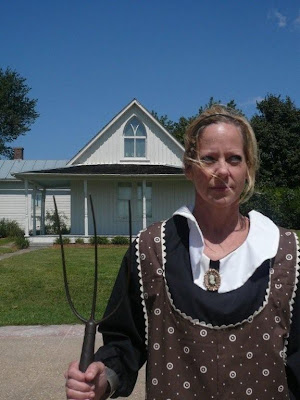 PHOTO: American Gothic portrait, minus the man. The resemblance is uncanny, isn’t it?

You park in front of the shiny new visitor center and are greeted by very kind volunteers who will take your picture for free. They even offer the costumes to replicate the couple in the painting. (See my pic above, albeit posing solo.) 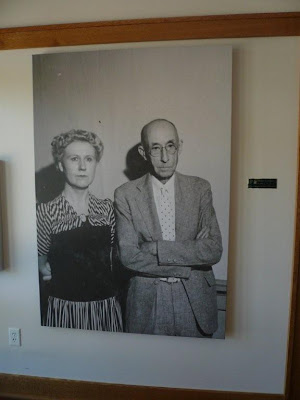 PHOTO ABOVE: A photo of the painting’s real life models is displayed in the museum’s entrance.

Walking through the museum, I smiled at all the clever parodies of the painting, well displayed, but also marveled at learning that the couple in the painting was not really a couple at all. (Considering I didn’t even know the house was here next to my birthplace it should come as no surprise I knew nothing else about the painting, like the fact it was created in 1930 and it was not a work by Norman Rockwell.) The woman was Grant Wood’s sister Nan and the man was his dentist from Cedar Rapids, and not woman, man, nor house ever posed together. Except they did finally pose together for a photograph in front of the house, 50 years later, when the house was made a National Historic Site. 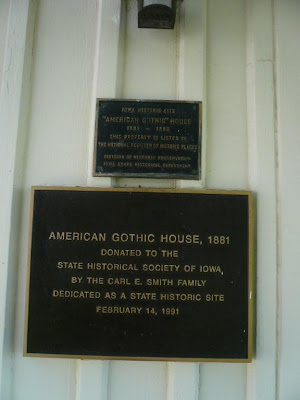 I read through the timeline of the house’s history, its owners and, in more recent years, its renters. Someone had lived in the American Gothic House only two years earlier. This piqued my curiosity and my questions to the museum curator, Molly Moser, began. Is the house for rent? How much? Who is the landlord? What is his number? Would he allow dogs? Can I see it? CAN I SEE IT NOW???? PLEASE????

“Well, I do have to do my monthly inspection, so I suppose I could let you come with me,” she offered, though cautiously. The house itself is not open to the public. You can only stand in front of it, pitchfork in hand. I think my explanation that I was in Iowa to be a pie judge at the Iowa State Fair and was subsequently visiting my childhood homes gave her reason enough to believe I was a safe bet. Not only that, I was salivating over the house and she was practically having to towel herself dry to keep my drool off her shirt. Molly knew I wasn’t going to leave until I gathered as much information as I could. So she let me in. Smart girl? Who’s to say. It was another fork in the road, a path Molly offered and one I hungrily chose. 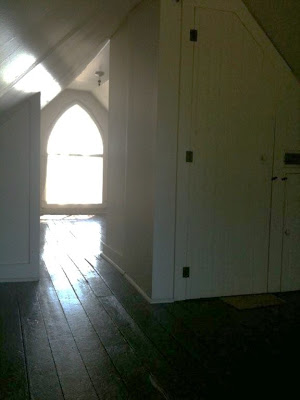 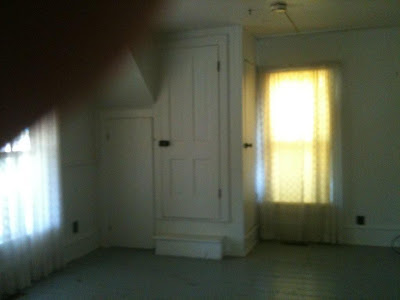 And there I was, setting foot in the old house. I loved the inside as much as the outside — the hardwood floors, the short but deep bathtub, the sloping attic ceiling, and, of course, the Gothic windows, especially the one in the back with the view of Iowa’s “wilderness” (and clothes line) where I knew in an instant my writing desk would go.

And with that my destiny was forever changed. Again.

Welcome to my new home. I get the keys tomorrow. 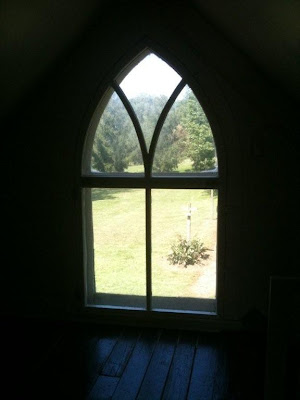 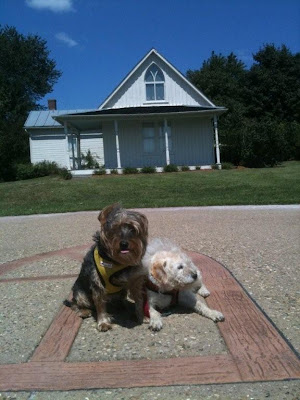