Whatever Happened to The Beast?

“What happened to The Beast?” some of you have been asking. The Beast is the nickname I gave the RV that Marcus left behind, the 24-foot-long camper that I was originally terrified to drive but proved not only a cinch to drive but a dream vehicle for long road trips. (When you get tired you don’t have to hobble into the next Motel Six, you just pull over and take a nap or make an espresso.) It also ended up being the genesis for the pie TV show concept. (Watch the 2-minute promo video here.)

When I drove to Iowa last August I made the difficult decision of driving my MINI to Iowa, leaving The Beast with my brother Mike in Southern California. My parting words were, “I’ll be back in a month.” Then I stumbled upon the American Gothic House and moved in. My plans to return to LA were stymied and thus my refrain became, “I’ll be there at Christmas.” But I ended up spending the entire winter in Iowa, writing my book and not really missing the California rat race. So, eventually, I promised, “I’ll come and get it this spring, maybe drive it back to Iowa at Easter.” But then spring came and went and the RV was still in California.

I didn’t feel much pressure as I sensed Mike wasn’t in a huge hurry to part with it. He was getting good use out of the RV for surf trips, even just day trips to Huntington Beach where he could use the big rig for both a wetsuit changing room and a post-surf-session coffee house with an ocean view.

He was also using it for his work, painting murals at schools around Los Angeles – “campus beautification projects” – with his non-profit called Operation Clean Slate. Turns out The Beast made a good scaffolding as well as overnight crash pad (he has to trace mural outlines with a projector and that can only be done in the dark). 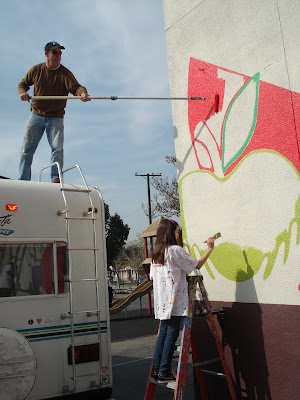 It was free storage for me and a free work/play vehicle for him, a true win-win. Until the day that a disgruntled neighbor (seems we all have one!) reported that The Beast had been parked a little too long on his residential street. It was on my birthday in June he sent me an email that read, “The time has come.” Attached to the email was a photo of a big red piece of paper on the windshield with bold black letters stating: “Notice of Parking Violation.” It was a warning, not a ticket, there was no fine, but even so, reclaiming what was ultimately my responsibility became urgent.

Ironically, it was on that same day – my birthday, June 14 – that the mayor of Eldon paid me a visit to show me the Polaroid photos my own disgruntled neighbors had taken of my dogs in their yard. Evidence. Proof of trespassing. Something needed to be done. It might have meant actually having to put my two little terriers on leashes. THE HORROR! Or perhaps erect a fence on that side of the lawn to keep my dogs from sprinting after the bunnies and squirrels that seemed to favor that particular neighbors’ yard. Or, could it be? Yes! Get the RV to Iowa, park it on that side of the property and use it as both a barrier to the neighbors’ lawn AND as a privacy screen to keep their prying eyes off my back door comings and goings. (These neighbors have more of an issue with me than just my dogs on their grass and, as such, my life has become their number one source of entertainment — and fodder for constant complaints to City Hall.)

With a little juggling of schedules and a lot of lucky timing, I was able to get the RV from LA to Phoenix, where friends from Eldon were vacationing, and they drove The Beast cross-country from Phoenix to Southeast Iowa. And now, I am happily reunited with my trusty travel rig. I cannot wait for a lull in this searing summer heat and this Pitchfork Pie Stand busyness to take it out on a road trip.

Until then, I am equally thrilled at how The Beast is serving this inadvertent purpose. My neighbors haven’t complained about my dogs since the RV arrived. Rather, I’m waiting for their next complaint: that I’m blocking their view. I have a response already prepared in anticipation: “If you need something to watch, there’s this thing called TV.”