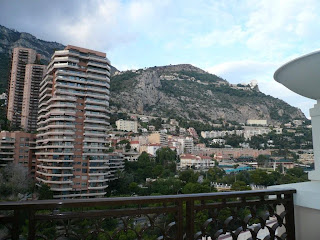 (PHOTO: View out of my Monte-Carlo hotel room)

It is my last day in Europe after a five-week journey. I was in five countries, spoke five languages, spent money in four currencies, and baked eight pies. My travels started in Mexico and took me to Germany, Switzerland, England, Monaco, and back to Germany. It’s a fascinating thing to move between so many cultures, landscapes, and languages. During this month I have perused the halls of the Frankfurt Book Fair, hiked in the Swiss Alps, driven through The Cotswalds in England’s countryside, walked the length of Kings’ Road in Chelsea, and dined with Prince Albert (OK, so it was along with 300 other people) in Monaco. Tomorrow I return to Saltillo, Mexico. 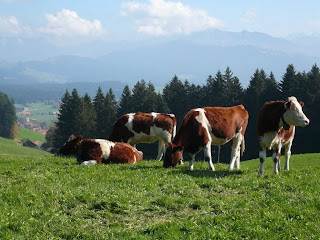 (PHOTO: Close encouters with cows during a hike in the Swiss Emmental)

I feel very privileged to be able to live a life as rich and varied as this. “Varied,” however, may be the wrong word. “Schizophrenic” may be more like it. To underscore this, just yesterday I was working on the publicity for a conference in Monte-Carlo, Monaco. Today I was baking apple pie in Stuttgart, Germany. Yesterday I was dressed in my pin-striped Armani suit. Today I wore my ratty jeans and running shoes. Yesterday I was elbow to elbow with high-ranking media executives. Today I was up to my elbows in pie dough with my friend Julia and her mother. Yesterday I was asked, “Voulez-vous aller à l’aéroport dans la Bentley ou la Masarati?” Today I was asking, “Haben Sie noch mehr Äpfel für den Pie?” Tomorrow I will be saying decidedly less interesting things like, “Tengo que lavar mi ropa.” (I have to do my laundry.) 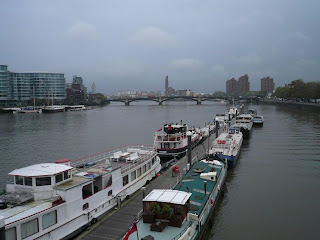 (PHOTO: Looking toward the Battersea Bridge in London)

What continues to amaze me through all this international travel is the common language of pie. No matter what country, I would always find that people love pie. I discovered so many kinds of pie and pie-lovers this month – from the British palm reader who told me of the Stargazy Pie to the French CEO who reminisced about his grandmother’s Pear Tatin to the waiter in the Chelsea pub who recommended the Steak & Mushroom Pie over the Fish & Chips. No matter whether a pie was filled with fruit or fish, cheese or chocolate, people were always eager to share recipes, stories, bites, and a smile.

Though I have no idea where the journey will take me next, clearly, I will continue to find pie. Or, as is more often the case, pie will find me.