I had forgotten what an individual expression pie can be. I get so used to making my same old classic apple pie, stuck on my soapbox preaching “keep it simple” and “I don’t like to have to follow a recipe.” Apple is certainly delicious pie, but when I attended a “First Annual Pie Palooza” yesterday I was reminded of just how many different pies are possible, and how those pies can reflect its maker. And, really, how variety is the spice of life.

The woman who held the party-slash-pie contest, Carolyn, lives in a neighboring town to mine. She and her twin sister Marilyn and their friend had stopped by my Pitchfork Pie Stand this summer and bought a few slices. Carolyn had been a regular follower of my blog, so when she discovered I was living close by she initiated the outing to the American Gothic House. And now, she claims, I was also the inspiration behind her pie party. 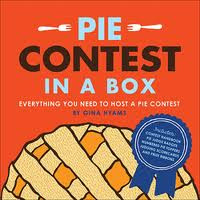 She even included a quote from me in her Pie Palooza email invitation prefacing it with “Why We Should All Bake Pies,” leaving me to explain:

“Pie makes people happy. Happy people want to do nice things for others. When everyone is doing nice things for each other all the time there can be no war, and therefore pie can save the world.”

(She found the quote in Gina Hyams’ “Pie Contest in a Box,” and was using Gina’s kit for the party.)

It wasn’t until all the emails had gone out that Marilyn suggested to Carolyn, “Why not invite the pie lady?”

Carolyn replied, “She’s so busy. She probably won’t come. But okay, I’ll send her an invitation.” To Carolyn’s surprise I immediately said yes.

She’s right. I am busy. But I’m also home alone all day every day sitting at my desk in my bathrobe and taking breaks only to walk my dogs or, on a really good day, ride my bike. What Carolyn didn’t consider is that while I love my solitude (it’s essential for both my productivity and creativity), I am often very deprived of human contact. I get a little tired of having the same daily conversations with my dogs. Their part of the dialog is limited to “We want to go out. We want to come in. It’s time for our breakfast. It’s time for our snack. It’s time for our dinner.” Along with the occasional, “Could you please fluff up the sofa pillows?”

So to venture out on a Sunday afternoon in the middle of an Iowa winter — an actual reason to get dressed! And brush my hair! — came as a very welcome change of routine. And, hello? Eating pie with a dozen or so other women? This also sounded like great fun. 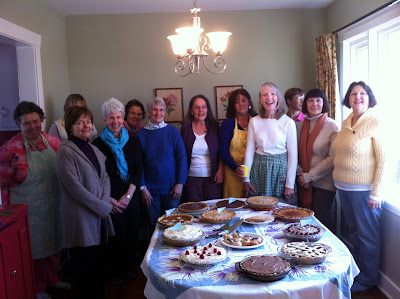 Having been a pie judge several times over (the National Pie Championships, twice at the Iowa State Fair, and once at the 52nd Annual Hedrick Iowa Barbeque Days), I knew how to approach the bounty: one bite at a time. I took only a small scoop out of each, circling the table like a pie-eating shark, my fork tines sharp and ready to dig in. I had learned my pie-eating capacity the hard way — as in, all that sugar may not affect you immediately but it will eventually catch up with you. No matter how good the pie, you will feel ill. And you will regret pigging out. So I exercised this self-taught restraint.

Everyone had brought a homemade pie. And not one pie was alike. Out of 12 pies I would have expected to see at least three All-American apples. But there wasn’t one. (I brought a pumpkin pie, as I, in a rare twist, had no apples on hand.) I had never heard of some of the pies. One that was unusual but particularly tasty, called the “Mystery Torte,” was made of Ritz crackers, egg whites, sugar and walnuts. It tasted like oatmeal cookies covered in whipped cream. It was sooooo good. But remember: Just. One. Bite.

Another was a “Spin-Off Boston Cream Pie” and I’m not sure what was the spin, though it may have been the sugar cookie crust. There was a Chocolate Mousse pie, a No-Bake Key Lime pie, a Rum Pecan pie, a Lemon Chess pie, and a Pumpkin-Pecan Streusel pie.  There was Carolyn’s Sour Cherry pie with an all-butter crust, her mother’s favorite. (Her mom is 92, living in Ohio, and Carolyn sent photos to her during the afternoon so she could see the festivities.) The cherry was my personal blue-ribbon pick. I ate a whole slice of it.

And there was one that surprised the hell out of me because I liked it so much: a Pineapple-Mango pie with….drum roll….a gluten-free crust! I am a person who flees in horror from the sight of anything marked “GF.” But this crust had a slightly sweet and crunchy texture reminiscent of a crumble topping. And I love crumble topping. And I loved this pie. I had at least four bites.

After sampling all the pies we were asked to write down on a scrap of paper the number of our one favorite. This is always a challenge to choose only one. They were all good. Excellent, in fact. Outstanding. And none had a store-bought crust! They were all made at home. With love. And sugar.

And the winners are….The envelope please. 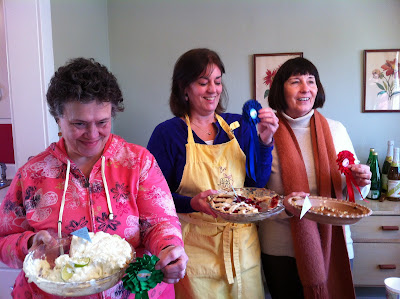 Pictured left to right: Mary took third place with her Key Lime. Bev holds the blue-ribbon for her Cranberry Raisin with a lattice top. And Claudia is happy with her second place victory for her Lemon Chess — made with 3, count them, sticks of butter.

I understood why Bev’s Cranberry Raisin won. It was one of those anomalies, not love at first bite, but you found something compelling about it so, curious, you went back for a second bite. And then a third. Maybe it was the mouth-puckering tartness followed by a pleasing aftertaste of sweetness that caused the “I want more, I need more” reaction. It’s the same thing that caused me to vote for a Strawberry-Margarita pie at the Iowa State Fair one year. I wasn’t sure I liked it at first, and then I couldn’t stop eating it. And now I am STILL thinking about it. Those kind of pies don’t come along every day. Kind of like people. Or boyfriends. Or books.

It turns out a good way to digest all that pie was to sit down with a cup of hot tea and listen to me read from my book, “Making Piece.” This was an impromptu reading, I had only brought the book for Show & Tell, not to hold court, but it was good practice for me. It was the first time I had read to a group from my book. Ever. And the ladies were a gracious audience. It was especially reassuring to hear them laugh in all the right places. Fitting for the Pie Palooza contest, I chose part of the chapter on being a pie judge at the Iowa State Fair. In this section I describe how tasting Lana Ross’s French Silk pie was the pie equivalent of having an orgasm.

I have a feeling the Second Annual Pie Palooza won’t have the wide variety of flavors they had this year. But my guess is, seeing how everyone expressed their own individuality in their slightly exotic, beautifully decorated, gorgeous and delicious pies, when they all show up next year bringing the same “Lana Ross’s Better Than Sex French Silk Pie” each one will have its own unique style and taste. And they will all be winners.