When I heard Luke Perry had had a stroke, I expected him to live. That’s because a friend of mine recently had a stroke, his second one, at age 56 and he is recovering. My friend, like Luke, is fit and determined. He’s doing the rehab and regaining use of his left side. So after Luke’s stroke I figured he too would recover. A few days later, when I learned that he had passed away, my nonchalant “he’ll be fine” changed to “WTF?!” He was only 52.

I met Luke Perry—aka Dylan McKay—back in 1990, when I was a publicist for “Beverly Hills, 90210.” I worked for the venerable PR agency Rogers and Cowan in its television division. They hired me to help with the launch of Aaron Spelling’s new production (and Darren Star’s first series) despite the fact I didn’t watch TV, let alone own one.

My job was to get attention for the new show to increase its viewership by pitching story ideas around the show and its actors. This was before social media. Hell, it was before email. I had to call or fax—remember landlines and fax machines?—editors of publications like TV Guide and Tiger Beat, and talent bookers for shows like “Entertainment Tonight.” I had to write press releases and mail them—in envelopes, with stamps—a phenomenon now referred to as “snail mail.” Getting coverage was no easy task because even though it was Aaron Spelling’s baby, “ 90210” was brand new and the editors and talent bookers didn’t want to give it column space or run segments until they were sure the show would still be on the air after a few episodes.

I managed to book a few interviews. I got one for Tory Spelling who was still too young to have a driver’s license. I had to pick her up at her family’s mansion and drive her to the meeting with the reporter. I got one for Jennie Garth and Shannon Doherty, to model second-hand clothes on ABC’s “The Home Show.” That one was a stretch but it’s the only show that said yes. And I booked one for Luke. I don’t remember who it was with, but I do know it was before he became the poster child for Teen Beat, a publication that at time was still reluctant to do anything.

He was meeting the journalist at the Hollywood Athletic Club, then a hip cafe and pool hall, and I was to accompany him—as if he needed a chaperone. As if the reporter were going to ask something so out of line I would be needed to run interference. But Luke had no scandals or skeletons. So all I did was sit there and listen, worrying the entire time about who was going to pick up the check. I wasn’t fully trained in publicity etiquette or PR budgets so when the bill was placed on the table I dared to ask Luke, “When your publicist from the network goes on interviews with you, who pays?” He replied, “Janine is pretty quick with the plastic.” I cannot count the times I’ve thought of that over the years in the face of a dining dilemma, and I have Luke to thank for the frequent use of my credit card.

I often hung around on the set, hoping to find some anecdote I could use for a story pitch—though it was also a ruse to get out of my windowless office. One day the cast was shooting a scene in the Peach Pit and the director had them repeat the scene eight times. I thought the first one was good enough, so was the second. By the third, I had the lines memorized and began to question what I perceived as a waste of both time and film. By the fourth, I would have stormed off the set in exasperation. I dare say Shannen would have too. But not Luke. He remained cool and calm, warm and friendly. In real life, he wasn’t a rich and troubled rebel; he was from the Midwest. He was humble and hardworking. He had done construction jobs before his big break and understood that if the show got canceled he might have to again.

A year later, he told “Entertainment Tonight,” “We start slapping each other when anyone gets too big headed. We made a promise going into this, ‘Look guys, no one expects we’re going to do anything beyond these 13 episodes, but if by chance we surprise the world and put out a quality program that people want to keep watching, let’s remember how we got there and what makes the show so good.’ The show is good…because it’s an ensemble piece. Everybody works and everybody brings something to it.”

Forget his good looks; Luke’s modesty is what made him so attractive.

“Call us back when the ratings go up,” the editors and talent bookers had said.

The ratings did go up. And up. And up. But I left my job before the show became the sensation it went on to be.

The work of whoever became the publicist after me would end up being more reactive than proactive. Instead of begging the media for even just a mention, they would be turning down requests for cover shoots and guest appearances. Which probably only made the job harder.

Once I no longer worked on it, I never watched the show, even though it aired for an impressive 10 seasons. It set a new record as Aaron Spelling’s longest running series, surpassing his eighties hit, “Dynasty.”

I may act like I don’t care about the show, but I’ve always taken note whenever the “90210” cast appeared in the media. Like when Tori Spelling, all grown up, graced the cover of People magazine each time she married, divorced, or gave birth. Or when Shannen Doherty displayed herself on the pages of Playboy. When Jason Priestley grabbed headlines for crashing a racecar at 180 mph. And when Brian Austin Green, who was a pipsqueak of a kid when I met him, dominated the tabloids when he married that stunning thing of beauty, Megan Fox. When Luke Perry’s role as Archie’s dad in “Riverdale” was announced, it caught my attention mostly as I had read the comic books as a kid, but also—as with any “90210” news—I felt the remaining threads of a connection to the actors’ lives. After all, I had in my own small, short-lived way as a publicist, helped launch these youngsters into stardom, at least by making the initial introductions to the press.

The news of Luke’s death worked its way into my subconscious as I had a dream about him the night after he died. I was at his wake. Luke was sitting off to the side, looking relaxed and dapper in a suit and tie. I went over to talk to him, not sure if he would remember me. He said he did, and invited me to sit down at his table. I wanted to ask him for his parents’ address so that I could send them a condolence card, but I didn’t have the heart to be a buzzkill and tell him that his funeral was the next day.

I like to think that Luke really is sitting at that table, as relaxed and well mannered as ever. That maybe he’s still alive in a parallel universe, while being remembered and celebrated in this one as if he were still here. And he should be celebrated. He was one of the good guys. And god knows, we could sure use more like him.

The reprise of “Beverly Hills, 90210” was just announced, ironically on the same day as Luke’s death. As sure as the world keeps turning, the show will go on, but this time without Luke as Dylan McKay and without me as its publicist. They would never hire me back anyway, as three decades on I still don’t own a TV.

If you read my last post about being a trapeze artist afraid to let go of the swing, then you will be happy to know I have managed to pry my fingers loose from the bar. I moved out of my Portland apartment on Saturday, stashed my returned deposit check in my wallet, and hit the road covering 984 miles so far. I have made it to the first stop on my new journey — Los Angeles — for a family visit and will be half way to Iowa this time next week, arriving in time for my first pie judging slot (out of 22!) at the Iowa State Fair. 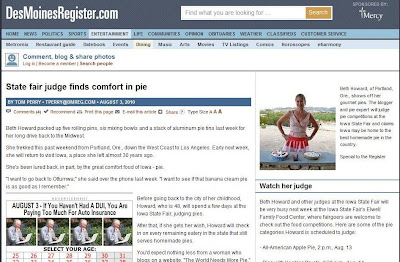 In anticipation of my pie judging, today’s Des Moines Register ran an article on me –“State Fair Judge Finds Comfort in Pie” — telling my story about losing Marcus and my quest to find homemade pie — and comfort — in Iowa.

When I think about how much I was dreading the one year anniversary of Marcus’ death on August 19, I am surprised to realize how little I have been thinking of that now, and instead how much I am looking forward to returning to my home state. Of all the things I could be doing to mark my husband’s passing –visit Crater Lake National Park where we met, ride my bike in the Portland Bridge Pedal (which we had ridden together), visit his grave in Germany — I cannot think of anything better, more fulfilling, and more life affirming than eating pie at the Iowa State Fair. Marcus would like that.

The shoot for the pie TV pilot begins tomorrow. In all the preparation I contacted many different pie shops for permission to film and to arrange interviews with their pie bakers. All that talk of pie made me hungry. So when the end of my conversation with the owner of Apple Pan, one of Los Angeles’ oldest and most popular pie diners, coincided with my dad’s call to ask if I wanted to meet for lunch, I knew just where to go.

“Dad, how does a piece of banana cream pie sound?”

“Mmmm! That sounds great, Boo,” he replied. I could have predicted the answer as banana cream is his favorite pie. 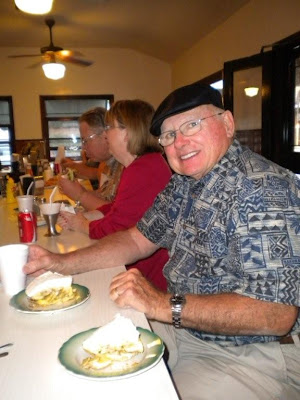 We met at Apple Pan, grabbed a stool around the horseshoe-shaped counter, and each ordered a piece of the banana cream pie. (According to the owner, Sunny, banana cream is their second most popular after the apple.) It was not only luscious looking, it was delish with a sweet and flaky thin crust generously filled with bananas and topped with fluffy whipped cream. We inhaled it in record time. Yum!

No matter what the outcome with our TV show, I am definitely going to enjoy the next 12 days of pie tasting 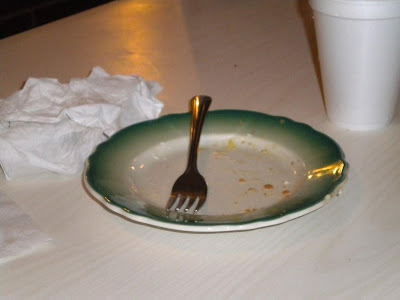