Less than 48 hours after my long haul from LA to Portland, I drove the RV north to Seattle — with my parents and two dogs as passengers, in the rain — for my 9-year-old niece’s dance recital. Tired and cranky and clenching the RV steering wheel as semis whizzed past, kicking up curtains of blinding rain, I wanted to turn “The Beast” around and go home. But, by god, I was not going to miss this dance performance. 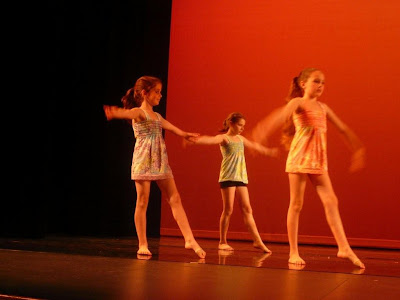 The last time I went to my niece’s dance recital was five years ago, her very first performance when she was four, when she still had baby fat on her little body. Now she is long, lanky, and muscular, a graceful athlete with big brown eyes and excellent coordination. She is full of strength, beauty, and confidence — and some fine dance moves. And I was an aunt full of pride. (Photos: That’s my niece Eleni above, far left — and below, front and center.) 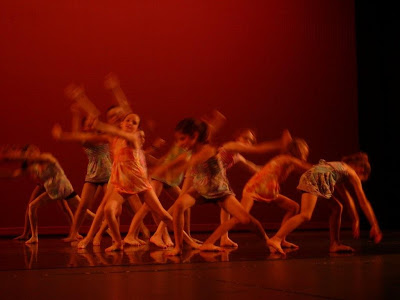 When the youngest dancers came on stage for their turn it brought back a flood of memories. I remembered watching Eleni in her first recital, a gasp-inducing pageant of cuteness. I can still hear the collective “Awwwwww” from the audience when the baby ballerinas came on stage. I remembered my own dance recitals from my own childhood. My sister and I spent our entire elementary school years in ballet, tap, jazz, and gymnastics classes. Over time we collected trunkfuls of tutus, leotards, and sequin- and feather-covered costumes, which we used for subsequent talent shows, well-organized events that included choreographed song and dance (thanks to my sister), and profit-earning ticket sales to the neighborhood. I marvel now at our pre-Game Boy era creativity and industriousness, underscoring the advantage of growing up in a place (Iowa) and time when TV didn’t air 24 hours a day. 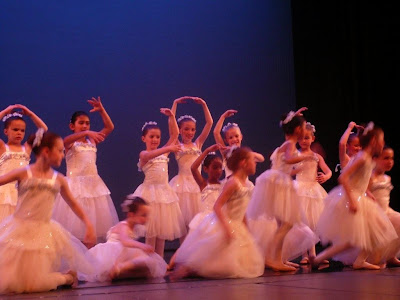 Now in this Seattle suburb, I studied this new crop of wide-eyed 4-year-olds. I observed their innocent faces, watching them take in the enormity of their on-stage debuts. This experience would be their first time in front of a big audience, first time wearing makeup and princess-like layers of satin and tulle, first time hearing the seductive sound of applause.

My sister remembers her first time on a stage like this. She told me that the feeling was so powerful, so addictive, it formed her entire future. She knew at that precise moment, hearing all that clapping — just for her — at the age of four, that she was going to be an actress. And that’s what she did, she became an actress, and a successful one at that.

So I sat there and wondered, what are all these little girls thinking right now? Are they so smitten by this glorious moment that they’re going to spend their lives seeking to recreate this stage-loving feeling? What will they grow up to be? Will some of them prove to be such talented dancers they’ll end up in the New York City Ballet? Or will some go the other direction, maybe become strippers. Will they become doctors? CEOs? Pastry chefs? Pie Bakers?! Will they win scholarships to Harvard? Will they get into drugs and drop out of high school? Will they have children? Will they get cancer? Have their hearts broken? Will they be freelance writers who marry sexy, smart German men, work really hard at the marriage, threaten divorce only to lose their husbands to ruptured aortas and become grieving widows? Do they have any idea of what life holds for them? To look at their beautiful cherubic faces, it was clear. No. They have no clue. Lucky them. Lucky, lucky them. 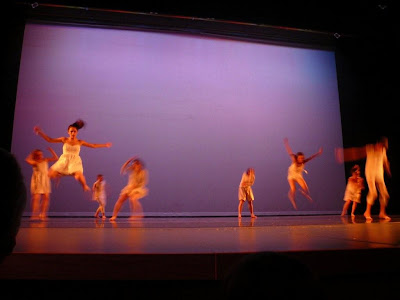 After the little girls took their bow, the older girls came on stage. These 14- and 15-year-olds didn’t inspire the same kind of wonder. It was clear they were already forming their life’s direction, already having created some kind of history. By their wild gyrations these girls expressed what I was feeling at that age: Let me out of the house, I’m ready to see the world! I’m ready to have sex! Okay, maybe not all of them. But there were a few suggestive hip-hop numbers that indicated their innocence had left the building. 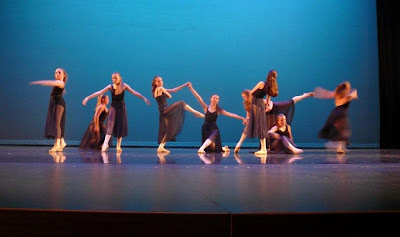 The recital ended and the lobby filled with parents handing bouquets of roses to their happy dancers, exuberant girls with cheeks glowing pink from all that rouge and adrenaline. Between glimpsing all this hope for the future and reflecting on all my nostalgia, it was well worth the white knuckle RV drive in the rain.

But it wasn’t my musing and memories that stand out. It was one specific moment, a blink-and-you’ll-miss-it kind of thing. My niece spotted me sitting in the second row, next to her dad (my brother Patrick), and flashed me the biggest, most magnificent smile, a smile that said, “Look at me, Aunt Beth. Isn’t this cool? I’m so glad you’re here.” Glad I’m here? I wouldn’t want to be anywhere else in the world right now! That moment made me forget about everything else — my grief over Marcus, selling my pie TV show, the Iraq war, the Gulf oil spill, my overdue taxes — even if just for a few blissful minutes. Which is why I’m already looking forward to next year’s recital. No matter how far I have to travel for it.