I maintain that pie is not about politics. “Pie is non-partisan,” I have been known to insist. “It is meant to be shared, to build community, and spread good will. Pie knows no cultural boundaries.” Thus, I normally avoid any discussion of the subject. But as I am living in Iowa during the 2012 Iowa Caucus, the subject of politics cannot be ignored. Admittedly the media buzz is rather exciting. I  mean, to have our humble state be the center of such acute interest with top level journalists from all over the country doesn’t happen every day. That said, the story here has become less about the politicians and more about the media itself.

There was an article published in The Atlantic in early December. It was written by Stephen Bloom, a University of Iowa professor who has lived in Iowa for 20 years. According to his piece, he feels Iowa is not representative of the diversity in America and therefore shouldn’t hold such power over choosing a president. 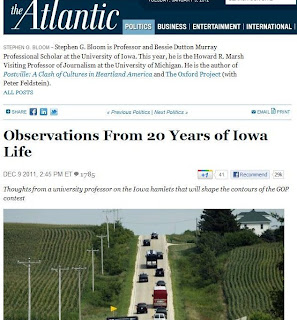 States Bloom, “Whether a schizophrenic, economically-depressed, and some say, culturally-challenged state like Iowa should host the first grassroots referendum to determine who will be the next president isn’t at issue. It’s been this way since 1972, and there are no signs that it’s going to change. In a perfect world, no way would Iowa ever be considered representative of America, or even a small part of it. Iowa’s not representative of much. There are few minorities, no sizable cities, and the state’s about to lose one of its five seats in the U.S. House because its population is shifting; any growth is negligible. Still, thanks to a host of nonsensical political precedents, whoever wins the Iowa Caucuses in January will very likely have a 50 percent chance of being elected president 11 months later. Go figure.”

Ouch! No wonder people are up in arms over his story. (See Kyle Munson’s story in the Des Moines Register for more.)

Instead of being outraged by Bloom’s article, I first stopped to remember the tenets I live by: “The Four Agreements” that come from a book of the same name by Don Miguel Ruiz.

1. Don’t make assumptions.
2. Always do your best.
3. Be impeccable with your word.
4. Do not take it personally.

Therefore, I did not take the writer’s words personally. They are merely the opinion of one man, a man who clearly doesn’t appreciate the countless advantages, positive aspects, and the abundance of heartfelt kindness of living in the Heartland.

Mr. Bloom is from San Francisco, a city that, in my experience, has its own issues. When I lived there someone left a note on the windshield of my car while parked at the Marina Safeway. Written on a scrap of a brown paper grocery bag, it said: “You asshole. You should be reported to the humane society for leaving your dog in your car.” What this righteous passerby did not account for is that I had just taken my well-cared-for, very lucky dog (rescued from a shelter, no less) on a two-hour wilderness hike, I was only in the grocery store for a mere 10 minutes, there was a dish of water in the car, the windows were left sufficiently cracked open, and the day was perfectly cool. This makes me an asshole? Really?

Contrast this to Iowa, where it is so safe I could have tied up my dog in front of the store instead of locking it in the car. That note and the attitude it portrays is one of the reasons I have no desire to live in that part of the country again.

And in spite of trying not to make assumptions, as well as being impeccable with my word (always remembering “The Four Agreements”), I cannot refrain from suggesting that perhaps Mr. Bloom is simply unhappy living in this “landlocked, flyover state.” He ought to consider moving back to Northern California instead of remaining here with the “hicks and meth addicts.” Ouch. Ouch. Ouch. Or better yet, in the spirit of Grant Wood who said, “I had to go to France to appreciate Iowa,” maybe Bloom should visit Paris. I can only imagine how critical he would be of the people and lifestyle there.

After having several discussions with friends who were disgruntled by Bloom’s controversial story, I was heartened to see a clever and well-produced rebuttal. Below is Scott Siepker with his now-viral video on YouTube (see below). In a concise and deadpan comedic way, he reminds the world that Iowans are not only well educated, forerunners in progressive politics, and the inventors of the computer, they are, in a word, nice.

To have people like that influencing who is going to become the next president is all right with me.

I haven’t lived in Iowa since I was 17, so I have never voted here. And while I won’t be voting in tonight’s caucus, I will be attending to educate myself on what an Iowa caucus is all about. And after that, once the media has packed up and left, the state can get back to its normal way of life and I can get back to thinking about my favorite non-controversial, non-political subject: pie.