Since my wanderlust has been swelling like a Grand Marnier soufflé– and I can’t get to Egypt right now — I decided to continue my pie search closer to home. That is, if you consider Western Texas close to LA. I had driven through this part of the country during my move to and from Saltillo, Mexico and vowed to return.

No sooner did I settle into my new house in Venice, I met a neighbor who by coincidence — if you believe in coincidences and not some higher power pulling puppet strings — owns a guest house in this same area.
So I packed up my new MINI Cooper, Team Terrier (my two small but mighty dogs), and hit the road. 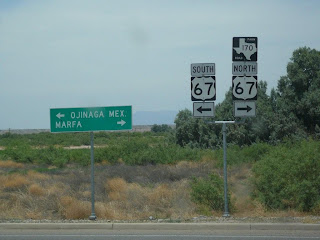 I drove through the up and coming artists’ community of Marfa, Texas. Though it resembles an Iowa farm town at first glance, a closer look reveals the population of 2,000 is made up mostly of ex-New Yorkers seeking a quieter — MUCH quieter — way of life. 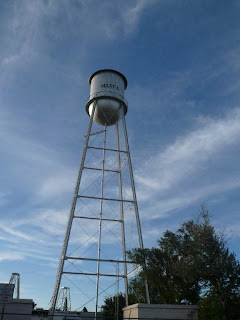 Tempting as it was to stay a spell in Marfa — to learn just what was attracting these big city folk arriving by the wagon-full, a mystery, really, as not one store or restaurant was open at the hour of 8PM — I continued south to Terlingua.
En route, I slammed on the brakes when I discovered a designer shoe store. Guess those New Yorkers can’t live without their Prada. 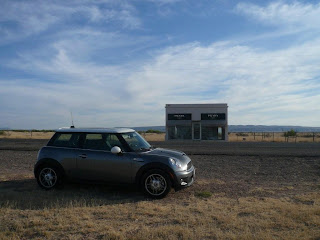 (The store is actually an art installation.)

I got back in the MINI (What a great car! Speed, sportscar-like handing and an average of 35 MPG) and drove into the sunset toward my destination.

Two hours south of Marfa (and an 18-hour drive from LA), nestled in the hillside of a ghost town, is La Posada Milagro, a rustic-chic hotel built from the rocky ruins of miners’ cabins, consisting of four guest rooms and an espresso bar. 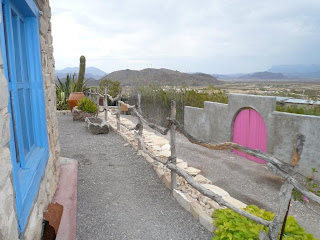 It also has an outdoor kitchen, which got me thinking… 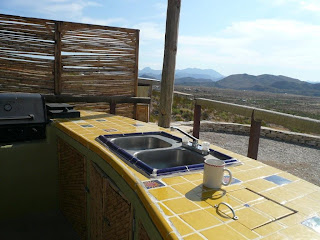 Wouldn’t this be a great place to bake pies? There’s a great view of Big Bend National Park.

And there’s even an oven. 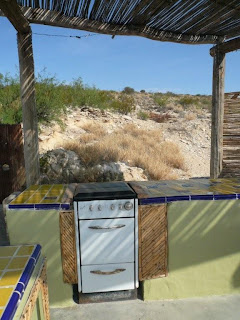 My first morning, I discovered another coincidence. When helping myself to a cup of coffee I found a cup sporting my pie business logo, the red and white checkered tablecloth pattern. But was it a coincidence? I don’t think so! 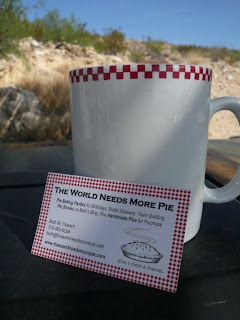