Ode to the Farm Pond 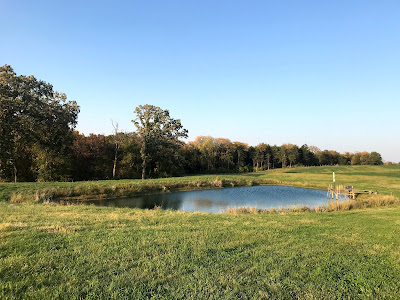 It’s my baptismal font, my hole in the ground that gets me a few feet closer to the earth’s core. It’s in these waters, the color of meat broth, where I immerse myself to calm my anxieties, soothe my aches—of the heart and otherwise—and to make me feel closer to nature, which to me is the same thing as god. No matter that these waters are filled with blue gills and bass, their silver bodies shimmering below the surface as they swim, their scales scraping my skin, their sharp little teeth nibbling on my legs, stomach, and buttocks that make me cry out in surprise. They are harmless, really. They’re not piranhas. And if not for the fish, algae would cover the pond in wall-to-wall green carpet.

Frogs line the perimeter, hidden in the willows, burrowed in the mud, sheltered by the fortress of tall grass bending in the wind. They croak their guttural chirps in unison, until some disturbance – like a ripple in the water made by my hand as I swim – makes them to go silent in an instant, as if the multitude of them were a singular voice.

The pond’s original purpose was not to be my private swimming hole, but for erosion control. A bulldozer dug out a ditch, the displaced earth was used to build up a berm to keep Iowa’s valuable black soil from traveling downhill into the growing gully below, and in turn an aquatic catch basin was created.

With no other options—given the six other ponds on the thousand-acre farm have resident snakes and snapping turtles and occasional algae blooms—I’ve claimed this pond, the newest of them, as my sacred space. But only after making an agreement with the frogs and fish to share it, respecting our coexistence in the ecosystem.

It’s the church I go to meditate, where I can sit in solitary silence on the end of the dock the farmer built for me, and put my face toward the sun, and talk to whatever higher power exists “up there” as the wind swirling around my body reminds me of my physical being.

It’s the chapel/the funeral home/the psych ward I ran to when my dog died, sprinting from the house and taking a shortcut across the field, flinging myself fully clothed into the cooling pool, not to drown myself, but to douse the searing pain of grief that coursed through me like fire. I stayed in the water for an hour that day, clinging to a rubber innertube as my body heaved with sobs, though it was the pond itself that was the life preserver. 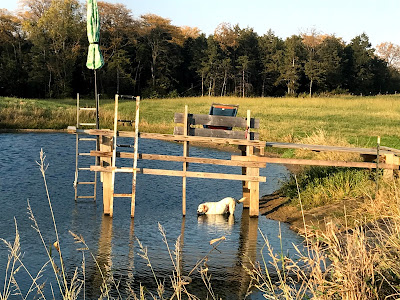 I wrote this piece for a writers workshop I’m taking. The assignment was “Getting Closer,” asking us to take a more intimate look at a place and describing it in more depth. When our group meets on Saturday they will likely pick the piece apart, telling me the structure is all wrong, that the descriptions aren’t fleshed out enough, yada yada yada. But none of that will matter to me, because nothing — no word order or word choice — will change the magic of this place for me.
Also, I chose this subject for the exercise because winter is approaching and the water will soon turn to a solid sheet of ice, and the frogs and fish will lie dormant in the mud. I will miss it until next year, when the spring thaw comes, summer heats it up to a tepid degree, and I can bathe in its healing balm again.
So this little story is my ode to the pond’s spiritual powers, a prayer of gratitude, and a reminder to all of us to revere (and preserve) nature. No matter how muddy it is.
PrevPreviousThe Right Books at the Right Time
NextTis the Season . . . for Finding SolutionsNext
Subscribe for Updates
Copyright 2022 | All Rights Reserved
Facebook Twitter Youtube Instagram Goodreads-g Pinterest