My friends Stacy and James from Portland, Oregon visited me at the American Gothic House two weeks ago. It was my second weekend of business with the Pitchfork Pie Stand and immediately upon their arrival in Eldon I put them to work on the pie production line. They were naturals, falling in love with pie making as quickly and passionately as they did with each other. They even took initiative and made a second bulk batch of pie dough without any instruction from me. But they didn’t quit after that. They proceeded fill my freezer with ready-to-use crusts, rolling and crimping each one as if they’d been making pie for years.
What they didn’t tell me was they had just eloped and their trip to Eldon, Iowa was actually their honeymoon. What??!! They swore they had a great time — making pie, not love. That wouldn’t have been my first choice, but to each his own. 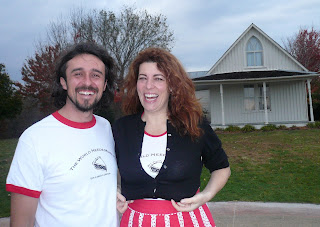 Stacy was my neighbor and a VIF (Very Important Friend) to me while I was living in Portland this past year (of mourning). She met James before I moved and I was happy to leave her in such good (and, ahem, big) hands. Stacy runs her own hair salon, 17th Avenue Salon, and James, well…

James’ work is a little hard to describe. He is an Oxford scholar specializing in an art philosophy referred to as “Social Sculpture.”

“You mean statues, like public art?” I asked him naively.
“No, like sculpting the consciousness of society,” he attempted to explain.

His profile on the Oxford website wasn’t of much further help. It merely answers the question of “What is Social Sculpture” with a set a of questions. Yeah, figures. “How do we develop a wider personal and philosophical framework that cultivates a deep sense of personal and shared meanings? How do we develop a culture of transforming our mode of consciousness? How can we begin to realize our full potential as human beings and work as transformers of the materialist thought systems that shape our world? How do we excavate the insights of the heart?”

Fear not. There is an easier way to explain this.

Bake pie and give it away!

“You are a sculptor,” he told me. “An Agent of Change.” He was referring to one of his projects where a group of art students, holding tall measuring sticks and wearing bright orange life jackets, lined up at intervals along an oceanfront to inspire discussions of rising water levels and global warming. “When you gave away those 400 slices of pie to people on the streets of LA last year, that was a way of engaging with people, getting them to connect on a subject and discuss it, and therefore alter their way of thinking.”

“I can see that,” I replied. “Giving away pie definitely inspired conversation, or at least questions. Everyone asked the same thing: ‘Why are you doing this?’ and we always answered ‘Because we want to make people happy.’ And then people made comments, like ‘If everyone gave away pie the world would be a better place.’ We could really feel what a positive influence we had on everyone who ate pie that day.”

“Exactly!” he said. “You are sculpting their consciousness.”

And that is where I thought our discussion — about how pie can serve as an Agent of Change — would end. But no. I underestimated James and Stacy, by a long shot.

The Honeymooners went home. And soon after they sent pictures. Lots of pictures. Pictures showing how busy they had been. Making pie. Influencing change. Sculpting society. 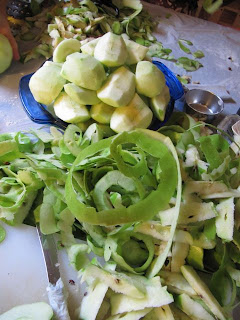 ﻿If that isn’t inspiring social change I don’t know what is. I just hope this concept of Social Sculpture (or pie baking or whatever you want to call it) influences more people, so there will be more pie — even better if free pie, given as an unexpected surprise to friends, neighbors and anyone in need — and therefore more happy people, and, well, ultimately, peace on earth.
The pie evangelist has spoken. Amen.
PrevPreviousBack on the Bike
NextDeer Poop PieNext
Subscribe for Updates
Copyright 2022 | All Rights Reserved
Facebook Twitter Youtube Instagram Goodreads-g Pinterest