When I was writing for magazines as an outdoor adventure/sports and fitness journalist I got a lot of swag — free stuff — from companies who hoped I would review their products. Back then I’d get packages in the mail containing fleece jackets, snowboard boots, trail running shoes, bike clothes, water bottles, carabiners, poison oak repellent, and the like. I did write the reviews and they were usually glowing, probably because my mother always preached, “If you can’t say something nice about someone, don’t say anything at all.” I would never get hired as a film or theater critic because I’m not capable of producing the scathing, career-ending diatribes they write. And as I’ve said before, I barely qualified as a pie judge for the National Pie Championships because my pie taste isn’t very discriminating — I like all pie! So those companies got lucky with me. 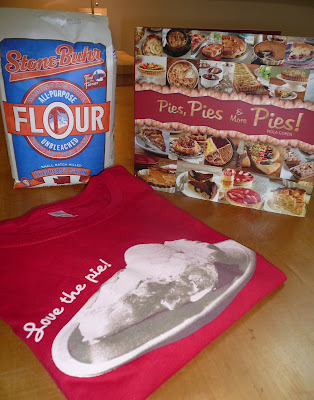 When I returned to Portland last week I was surprised to find a pile of packages on my doorstep. Reminiscent of my adventure journalism days, it was SWAG! But this time it was pie swag. I shake my head when I see what direction my career has gone. I used to get sent on extreme adventures, assignments that no one else would take — sky diving, scuba diving with sharks, a week-long trail running trip, bicycling across Iowa, and the most hard core of all, the 10-day, 300-mile Eco-Challenge race across the Utah desert. These days my most challenging assignments include peeling apples, scraping pie filling off the bottom of my oven, learning how to use my new iPhone, and getting to my grief therapy appointments on time.

Still, getting the pie swag was thrilling. For one, that means these PR people not only found my pie blog, they weren’t completely turned off by all my talk of death and grief in between the occasional pie story. (Hey, EVERYONE dies, so yeah, we NEED to talk about it!) Secondly, I could use all this stuff.

Here’s what the booty included, and my preliminary reviews of it:

1. A 5-lb. bag of Stone-Buhr Flour touted as the “first certified sustainable flour. Locally-grown by family farmers in the Pacific Northwest, milled near the fields and farms it was grown on – in Spokane, Washington.” Sounds environmentally responsible. But does it taste any different? Make a better pie crust? We shall see!

2. A newly released cookbook called “Pies, Pies, and More Pies” by Viola Goren (Imagine Publishing, 2010), which is about — you guessed it — pie! Her baking techniques call for a food processor — of which I am not a fan! I have never owned one as I insist that handmade pies be made with your hands. And her dough calls for egg yolk and heavy cream, which seems too rich for my puritanical pie values. HOWEVER, I am going to keep an open mind, and reserve judgment until I give it a try. After all, I didn’t think I would ever like gluten-free pie, and look how that turned out.

3. A red t-shirt from Love the Pie (find them on Facebook and Twitter.) It’s Pillsbury’s Social Media arm of their publicity machine and one of the best examples I’ve ever seen of corporate PR. They are not pushing their packaged pie crust, they are focusing on building a bigger pie community. They get the idea of a soft-sell and I admire them for that. AND it’s working.

What perfect synergy. I can use the flour to make a recipe out of the cookbook while wearing my new t-shirt! And what great timing. I just bought four pounds of strawberries. So instead of spending the Memorial Day holiday climbing Mount Whitney or dog-sledding across Alaska, I’ll (quite happily) be trading my adrenaline rush for a sugar rush — and making pie.