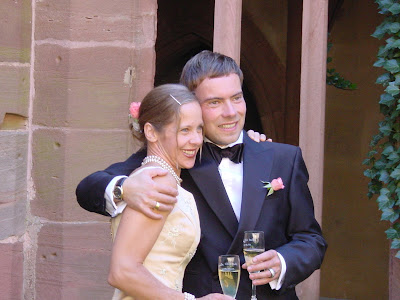 Marcus and I got married exactly six years ago. We have three anniversaries for three different weddings on two different continents: August 22, September 6, and September 20. First was the “Standesamt,” where we got the German version of our marriage license at the Rathaus (city hall) in Tiefenbronn, Germany. It was a small ceremony with just his parents and his friend, Hannes, who served as my translator. Next, we had a ceremony on a farm near Seattle, Washington – a sort of elegant picnic – for my American friends and family. Two weeks after that we walked down the aisle of a famous thousand-year-old church in the tiny village of Alpirsbach in Germany’s Black Forest, where Marcus’ parents, grandmothers, cousins, coworkers and many others joined in our black tie celebration.

It seems fitting then – or so people commented – that we had three funerals on two continents. First, on August 23, we had a simple-but-elegant ceremony in Portland, Oregon – the city where Marcus and I had lived for a year and a half, and where he died of a ruptured aorta on August 19 during the last week of his 3-week vacation. Secondly, on September 1, we had a formal church service in the tiny, picturesque German village of Muelhausen, surrounded by roses and serenaded by a quartet of French horns as Marcus’ parents, cousins and coworkers and many others joined in the “Abschied” (Farewell) – minus the grandmothers who both passed away last year. The horns played Dvorak’s “The New World” as a tribute to Marcus’ bi-continental lifestyle. And lastly, on September 4, we had a burial of Marcus’ ashes at a quiet cemetery 3 kilometers from his parents’ home. Out of all the draining, devastating events of these past weeks, that moment, acknowledging that his fit, gorgeous, sexy body, a body I had made love to and always adored, was reduced to ashes that fit in an urn, and then lowered in the ground, his gravesite covered in roses and marked by a simple wooden cross bearing his name…that was by far the lowest of the low points. 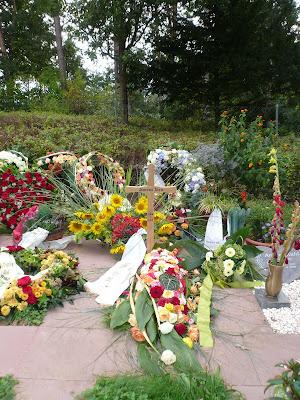 That same day I was required to go back to the Rathaus in Tiefenbronn, where we signed our marriage certificate, the place where I first signed my name as Beth Iken. I continued to use my maiden name during our marriage, but on this particular day, I was required to sign my married name, for the last time, as Beth Iken – on Marcus’ death certificate.

What neither of us ever signed were the divorce papers. We almost did – twice — once in spring of 2008 and then this August. With the papers prepared, peaceful agreements made, both times we shared our regrets about our marriage being so difficult to manage, due to his corporate career (me being disgruntled for his long hours at the office and for following him around for his international transfers) and my freelance wanderings (him frustrated with me for my incurable wanderlust and lack of concern about health insurance and retirement funds). We got all the way to where the dotted line awaited our ink on paper. But it seems we were meant to stay married. In 2008, our divorce discussions were so loving and caring we just looked at each other and said, “What are we doing? We love each other. Let’s make it work.” We tore up the papers and I followed him to his job posting in Saltillo, Mexico. However, as the long days alone in our Mexican house wore me down I took a job in LA and left. We knew how to maintain a long-distance relationship. We talked every day. We emailed. We visited each other every month. However, the distance became even greater when Marcus got transferred back to Germany, a place I said I couldn’t live again (I blamed the difficulty of learning German). He was so busy with work there wasn’t even a chance to visit him. My job in LA ended (due to the economic climate) and I soon found myself in Terlingua, Texas, a good place to write a book. The last time I saw him was May 1, for a perfect weekend together in Portland. Time marched on until it was the longest we had been apart and, thus, the question was raised again: What is our future? How can we sustain this? The answer, Marcus concluded, was that we are two people trying to fit into one marriage, and that although we love each other anger was created by trying to change each other to fit into this one institution, that steadily all the good connections between us were pushed out of the way.

I summarized my own conclusion in pie terms: “Our marriage is like overworked pie dough,” I wrote. “You can only knead it so much, too much and it gets too hard, so you have to throw out the dough and start over. We should have known that mixing a free-spirited California girl with a German automotive executive was an exercise in futility, like trying to whip meringue in a greasy bowl where, with even the slightest presence of oil, turning the beaters up to a higher speed still isn’t going to accomplish the necessary lightness of being. We need to throw out the dough, chuck the egg whites, and wash out our bowls so that we might fill them again.”

Marcus died before we signed the papers. I cannot make sense of why he died. The shock and sadness of losing him is something I fear will never fade. But as I search and search and SEARCH for reasons and answers, the only comforting thought is that it seems we were meant to stay married. I am grateful we are still married. I said I would only marry once in my life and I married Marcus. I will continue to honor him, to respect him, to love him and to remember him. And on September 20, the anniversary date we chose to celebrate, I will open a bottle of Champagne and make a toast to all the goodness, the passion, the adventures, the fun and even the struggles we shared. “Love of my Life,” I will say, raising my glass to the stars in the black Texas night sky. “This wasn’t the way I wanted to stay married to you, but I am trying to accept everything, every gift, every loss, every breath. Happy Anniversary.”

And that’s where our story ends. Three weddings, three funerals, no divorce, and eternal love.