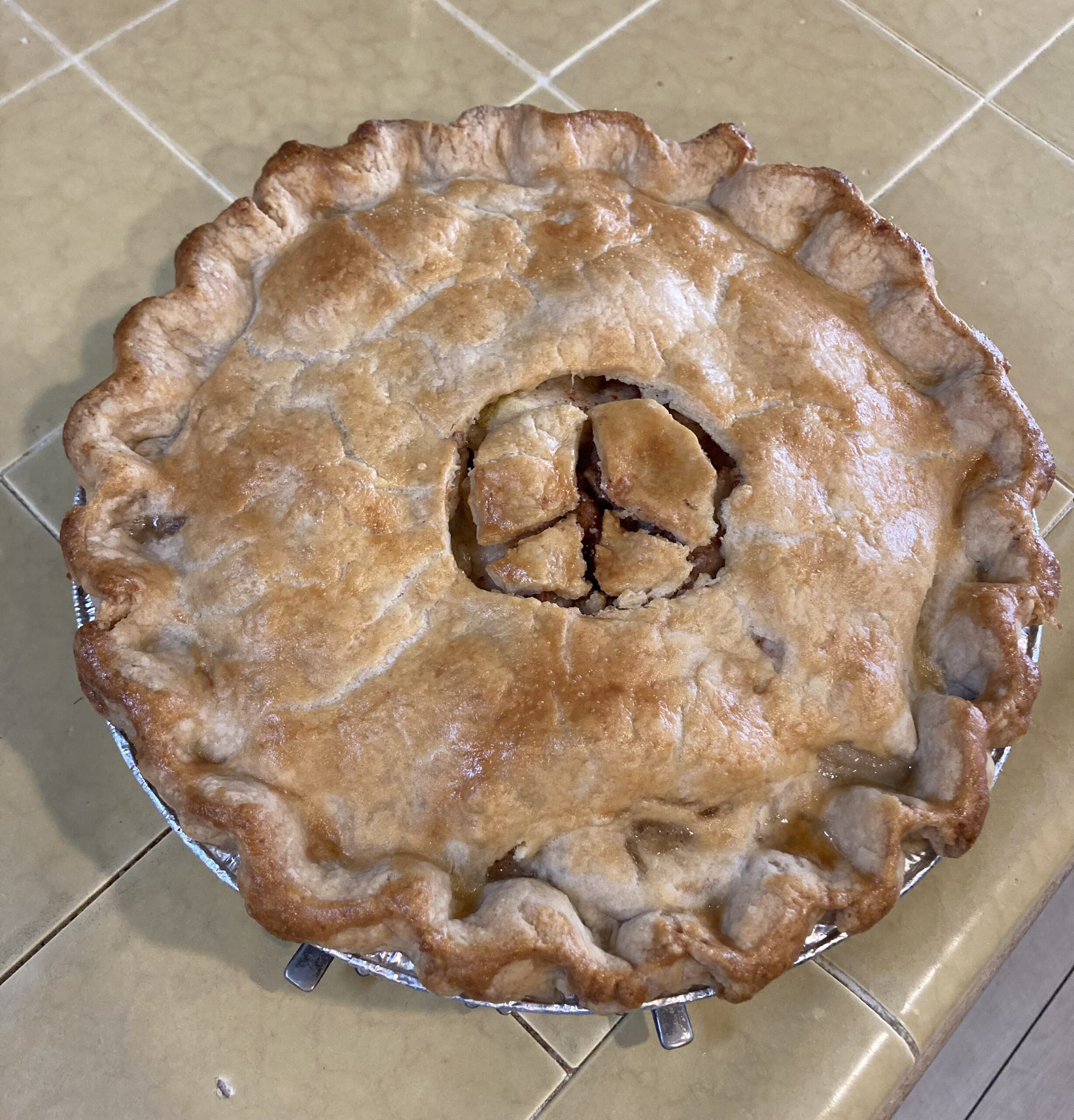 Allison Engel is a playwright, a journalist, a political activist, a communications director, and so much more. She’s a force! (Read her bio and you’ll see what I mean.) We have a lot of writer friends in common because she lived part-time in Iowa, but she was also living part-time in LA, so when I was in California last year I reached out to her. We met for lunch and had a great conversation; I was glad I made the effort to connect. (Never hesitate to email someone you admire.)

A lot can happen in a year. Allison lost her husband to cancer and moved to Pasadena full-time after his death to be closer to her daughter.

In my sympathy card, I had written that I wished I could bring her a pie. So when I was back in LA a few weeks ago, and we made plans to meet for lunch, I knew what I had to do.

The apple pie was still warm when I got the restaurant and she thanked me for it. But then I told her, “There’s one condition—you have to share it with someone.”

We talked for nearly three hours—I remember this because I was worried about getting a parking ticket. I didn’t care. Spending time together was worth more than whatever the ticket might cost. (I didn’t get one.)

Allison sent me several emails after our lunch. The first one said, “I am still gobsmacked that you made me a pie. That’s a first in my 71 years. It’s so beautiful. I took a photo of it and am going to have a slice for breakfast and share it with my new neighbors.”

The second one said, “This pie is so, so good. The crust is amazing. I am a very critical pie-eater, and this is one of the tops in my pantheon of all-time favorites.”

But her last email was by far the best. “I took pieces of pie next door to my new neighbors (they are renovating their unit), and they had gone back to the East Coast, but all their workmen were there. So I shared the rest of the pie with four tile-setters and painters, and they LOVED it. They were pretty incredulous that this amazing treat just appeared at the work site. Their English was limited, as was my Spanish, but the pie was the only language we needed.”

My reply was this: “I cried when I read your email this morning. I was at my mom’s and I told her about it, and she teared up too! THIS is world peace (piece) in action!!!! This is the magic of pie and you experienced it firsthand. I’m tearing up again as I write this. Remember our conversation over lunch, when I was saying I don’t really know how to measure success—is it a certain number of book sales? Is it making the bestseller lists? No, THIS is the measure of success. You, the workmen, the pie, period. Success is measured in kindness. Seriously, I still want to cry because this is choking me up so much.”

I once took a photo of a sign that read, “Never stifle a generous impulse.” To that I would add: Never underestimate the power of a small gesture, like baking someone a pie. You never know how far the ripples will reach.