World Piece Recap — 2/3 of the way through

I’m two-thirds of the way through my 3-month World Piece journey and I finally have a moment to update my blog. I had every intention of posting here regularly but the trip got away from me and there was never enough time, energy or Internet connections. I have, however, managed to post on my Facebook business page nearly every day — a lot of photos and captions to help you follow along with my travels. You don’t have to be signed up for FB to see the posts. If you are not signed up for FB you will be able to read everything but just won’t be able to add your comments. If you are following me already, please know I read all the comments and I appreciate them so much. Here is the link: www.facebook.com/TheWorldNeedsMorePie

Here is a recap my journey so far. I have had some ups and downs, but overall the trip has been exceptionally positive. 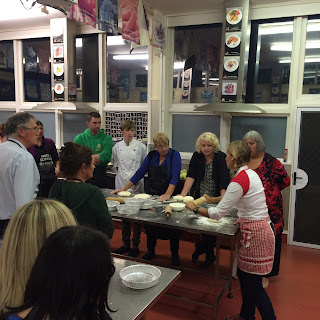 New Zealand was so beautiful, but was so cold! It’s winter in the Southern Hemisphere. I lived in my down jacket, wearing long underwear underneath my bib overalls, wrapped in the wool prayer shawl made by my host Grace Bower that was the impetus for traveling there in the first place. We put a lot of miles on Grace’s Nissan station wagon, and visited the Yummy Fruit apple orchard in Hawke’s Bay, made pies from the apples they donated in a pie class for 20 at a local college’s culinary school, and saw a lot of stunning untrammeled landscape. Soaking in NZ’s hot springs and drinking endless cups of “flat white” helped warm the bones. 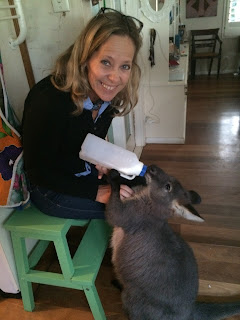 Australia was all positive — I spent time with and made pie with very dear old friends, Kate Hayward and Foong Broecker, gave a presentation to the Sydney International Women’s Club, met former prime minister John Howard (my dad’s name too!) at a luncheon celebrating the 800th anniversary of the Magna Carta, and got to bottle feed a baby kangaroo. And I sampled a lot of Aussie’s meat pies, some with mashed peas and potatoes on top. Talk about comfort food!  But it was in the friendships — new and old — where the real comfort was found.

In Bangkok, I had a cold for the first 4 days but I bounced back quickly (I credit the fresh fruit and healthy Thai diet for helping speed up my recovery), but after that I pushed full-steam ahead making 75 pies for the American Embassy’s 4th of July party. In order to accomplish that I moved into the pastry kitchen at the Grand Hyatt Erawan where I baked side by side with the Thai staff and came away with some very good friendships. They spoke Thai and I spoke English but we spoke the same language through our baking and our smiles. 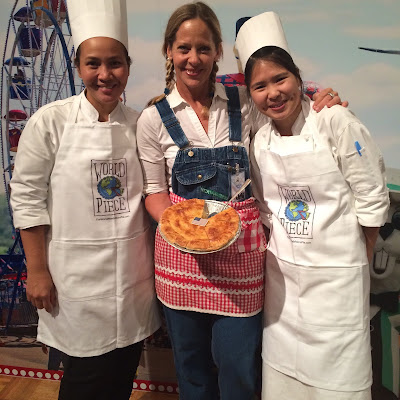 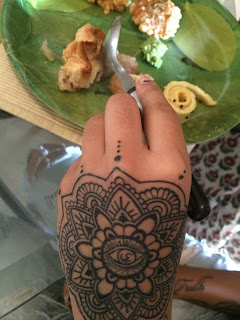 India was a big challenge for me. They say you either love it or you hate it. I didn’t love and didn’t hate it, I just didn’t understand it. I did not experience a bad stomach like I had expected, but I cried every single day, which I had NOT expected. I don’t know why it was so challenging…I don’t think it was the poverty as much as it was the grime and garbage. If cleanliness is next to godliness then I wonder why this place is deemed so holy. I did, however, fling myself headlong into it. I taught two pie classes at the Four Seasons Hotel Mumbai that were such a big hit they requested I teach a third. Instead of teaching another class I spent that day, courtesy of the lovely Deepa Krishnan of Mumbai Magic, touring India’s largest slum. I was impressed with the industriousness and work ethic there. These people are not hanging around, they are working 10-hour days and making money!  “Don’t call it a slum,” I was told. “It’s a neighborhood.” That was one part of India I actually understood.

After India, I was in Lebanon, in Beirut, a place the American government has placed on the  “do not travel there” list. Alas, I went, because I had an incredible host, cookbook author Barbara Abjeni Massaad. I stayed with her and her family (husband, 3 teenage kids, 2 dogs and 2 cats) in their  apartment. There was evidence of the war, now past, with ongoing effort to ward off any future uprisings. There are barricades, road blocks, military check points, and sandbags surrounding various places and numerous abandoned buildings. Still, it felt safe — except for the driving. There are almost no stoplights so each intersection or onramp is a free-for-all, which was very unnerving. 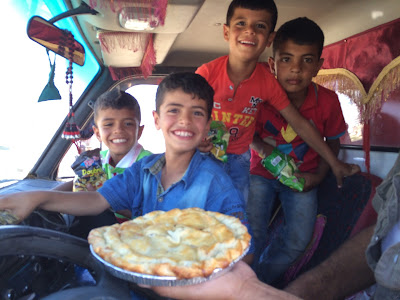 Barbara took me to a Syrian refugee camp about an hour from Beirut, toward the Syrian border. Talk about not heeding the “do not travel there” warning! We delivered 12 homemade apple pies (that took me 9 hours to bake in a 90-degree kitchen) to people living in tents. I am sorry to say our effort didn’t feel as noble as it sounds. There was tension in the camp and a fight was just breaking out in the very spot we were headed to, where friend’s of Barbara’s lived. (She spent two years visiting the camp, building up trust and relationships, and then photographing the people for a humanitarian aid project and soon-to-be-published cookbook called SOUP FOR SYRIA. You can pre-order it here. We had to leave the camp so there was no time to tell the story of the symbolism of the pie, and how we wanted to promote peace. But we can only hope that that little taste of comfort will lift the spirits of a few. You can never really know what impact you’re making. It’s a lesson in trust, humility, gratitude and so many other things.

One of the refugee families we visited was educated and had been successful in Syria. This family of 11 is trying to use their skills, both creative and business, to make a difference. The eldest son, Wissam, was a third-year mechanical engineering student when they had to flee their homeland. He is now a budding filmmaker, documenting peace efforts in the camp. I was very moved by this video he showed us. In Arabic these kids are saying, “We miss peace. We want peace.”

Who knows if the pies had a direct effect, but it was pie that led us to this filmmaker and his message, and by sharing this it keeps the effort moving forward. So it all matters. 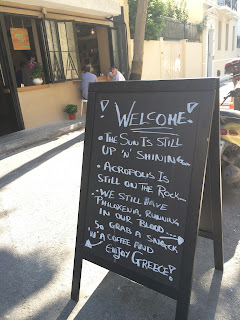 I arrived in Greece, my shortest leg of the trip, with a traveler’s “bug.” I won’t go into the gory details about my compromised health, but sadly, I slept the entire five days I was in Athens. I finally saw a doctor, got on an antibiotic, and tried to change my flight so I could stay longer and make up for the lost days. If you’ve ever been to Greece in August you will know that the airline practically laughed in my face. There were no seats available for 2, even 3 weeks out. There was no outward sign of the country’s financial crisis with this summer tourism season in full swing. And happily the media’s fear-mongering about tourists getting mugged didn’t keep travelers away. I had to stick with my schedule and fly onward, to Europe. I will just have to return to Greece another time. In fact, I loved the teeny tiny bit of it I glimpsed — seeing the islands from the plane, the landscape out the window of the airport train, and the historic streets around my bed & breakfast near the Acropolis—enough to know it warrants its own separate trip. I mean, this was the birthplace of pie and I was too sick to even eat one bite! So yeah, returning is a must.

On July 29, I landed in Frankfurt, Germany and made a beeline for Bern, Switzerland. Medieval Bern at the foot of the Alps is the first city in Europe I ever visited — when I was 22 — and no sooner did I arrive that summer I made some friends with two sisters, Eve and Uschi. Fast forward 31 years, we have been friends so long we are more like family. I was so depleted from being sick I tempted to bail on the rest of my World Piece journey and head back early to the US. Instead, the cure was coming to Bern. Old friends in a gentle, peaceful place (sheep are grazing right out my window and I can hear their neck bells tinkling like music) combined with vitamin C (as in chocolate!), I am in an ideal place for replenishing my reserves.

I fly back to the US on August 27 and I still have a few countries to visit— and a lot more pie to make and taste—before I head home. So keep following along (on Facebook).

I wasn’t sure when going into this project if I would have enough material to write a book about my journey, but I am now convinced that I do. There are many threads that connect the stories, the people and the places. It has all the elements of “the hero’s journey” and all the plot points that fall right into place of a three-act structure — as if it was planned that way. It wasn’t! I will likely be spending the fall back in Iowa where I plan to buckle down and write about the experience while it is still fresh and raw. But I have to get through the rest of the trip first!

Thanks for checking in.
Love,
Beth