The Start of Leg 2: Surreal Times in Sydney, Australia

I flew into Sydney, Australia from Auckland on my birthday, June 14. When I got off the plane and came out of customs there was a camera crew waiting with my friend Kate standing behind them. When Kate told me she was going to try to get some publicity for my trip, I thought she had gone way overboard. Three cameras were pointing at me with their spotlights on. My World Piece project may be noble but it’s not that newsworthy. I walked past them and their lenses did not follow me. Kate and I had a huge laugh when we saw that right behind me was the famous Australian rugby player, Jarryd Hayne, who was just flying in from California where he now plays NFL football for the San Francisco 49ers, and all the cameras rushed toward him. Phew!

Kate took me for a long walk around the city on my first day there. We walked straight into a pie shop! Called Harry’s Cafe de Wheels, this famous place is a Sydney institution, around since the 1940s. Probably one of the first food carts — long before they became popular — Harry’s sits on the waterfront of a wharf where military ships dock. No wonder they’ve been so successful — they serve the ultimate comfort food: meat pies topped with mashed peas, mashed potatoes, and gravy. 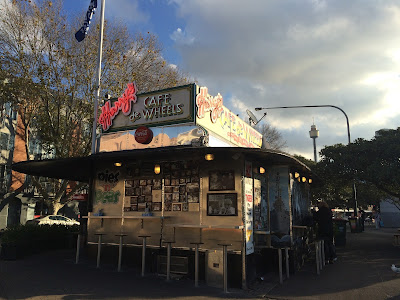 The next day was a busy one. Kate goes to work by ferry and I joined her on her morning commute. A ferry ride on a sunny morning is the ultimate way to see Sydney Harbor — or Harbour, as they spell it. This kind of transport would almost make me want a full-time job in the city. Almost.

I left Kate at her office and walked a few blocks over for a meeting with Sam Cawthorn, an author, amputee and motivational speaker. He is someone Grace in New Zealand thought I should meet, because he is an inspirational figure, so she sent me his contact details. Because I want to meet all the inspirational people I can, I contacted him — and I asked him if he’d like to meet for pie. (Does one need any bigger agenda than just eating pie?)

So Sam and I met, and talked, and ate pie for breakfast. Steak and Mushroom pie at Pie Face, an Australian pie shop chain that expanded to the US and now is fighting to survive a bankruptcy filing. But that’s not relevant as their doors are still open and their smiley pies are still good.
Sam asked me about World Piece. I explained my mission, which I might have been downplaying a little bit as it prompted him to quote Marianne Williamson, pounding his chest as he spoke —
Our deepest fear is not that we are inadequate. Our deepest fear is that we are powerful beyond measure. It is our light, not our darkness, that most frightens us. We ask ourselves, who am I to be brilliant, gorgeous, talented, fabulous? Actually, who are you not to be? You are a child of God. Your playing small doesn’t serve the world. There’s nothing enlightened about shrinking so that other people won’t feel insecure around you. We are all meant to shine, as children do. We were born to make manifest the glory of God that is within us. It’s not just in some of us; it’s in everyone. And as we let our own light shine, we unconsciously give other people permission to do the same. As we’re liberated from our own fear, our presence automatically liberates others.
— and then he told me I needed to shoot more video for my social media sites and made me promise that I would do that because it would make me more successful. Hmmm…well, I still like my still photos and writing essays. He told me how much he loves what he does, and then we said goodbye. I’m not sure which was fuller afterward, my belly or my head.
But the day got even more “Dreamtime” after that. (Had to throw in an Aborginal term since I’m in Australia.) First the ferry ride, then the smiling steak pie and pep talk, and then….lunch with the former prime minister of Australia, John Howard! Where am I and how did I end up here?!?!
It was the 800th anniversary of the Magna Carta. Kate’s parents had been invited to a luncheon and had two extra places — for Kate and little ol’ American me. I had to laugh because it was the ultimate cultural experience, a window into an octogenarian underworld as the lunch was hosted by the English Speaking Society and some other organization that might as well have been called Save the Monarchy. I could be a neutral observer and marvel at the different ways in which people view the world — or how they think the world should work, still work after all several centuries. Whether Australia is part of the Commonwealth or an independent republic, it’s a really great country and I feel really excited/lucky/privileged to be here and experience it — even if just for 10 days.
The funniest part — well, maybe not funny because it forces me to admit my lack of knowledge of world history — is that I had to Google “Magna Carta.” It is basically a charter of liberty, the first document to declare that no one in society, not even a king or a queen — is above the law.
No free man shall be taken or imprisoned, or dispossessed or outlawed or exiled or in any way ruined, nor will we go or send against him except by the lawful judgement of his peers or by the law of the land.
Good to learn something “new.” That’s why it’s good to travel. You can fill in the missing pieces of your education, while dining on a lunch of grilled salmon and lemon tart with dignitaries and well-dressed white-haired ladies.
My next post — if I can keep up with my blog — will be about my presentation at the Sydney Women’s International Club.  So check back soon. There’s more to come. More pie, more people, more countries.
Only two and a half weeks into it, the World Piece journey has been a great, fulfilling — and mind-opening — adventure so far. Thanks for following along! I’m posting daily on Facebook — and you don’t need to be signed up for FB to read it — so check there for updates in the meantime. https://www.facebook.com/TheWorldNeedsMorePie
RETURN TO THE WORLD NEEDS MORE PIE WEBSITE
PrevPreviousFirst Pie Class of the World Piece Journey: New Zealand
NextWorld Piece Recap — 2/3 of the way throughNext
Subscribe for Updates
Copyright 2022 | All Rights Reserved
Facebook Twitter Youtube Instagram Goodreads-g Pinterest