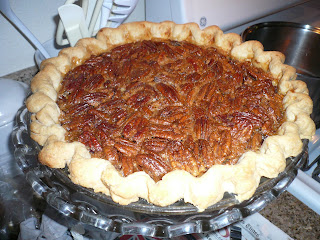 My first pie of 2009 wasn’t made from the pecans on our trees in Mexico. In fact, I never did get to make a pie from the pecans growing in our backyard. The pecan harvest passed me by while I was traveling in Europe for six weeks this fall. Even if I hadn’t been away I still wouldn’t have reaped the benefits of the harvest as we moved out of our house which sat on the edge of the Saltillo, Mexico pecan farm. Our house had developed so much mold, a serious problem that started with the fungus on the pecan tree that grew inside our house, that we had to find another place to live. Which ended up being two separate places. Marcus moved a half mile away to a better insulated home and I moved back to Los Angeles. He continues to work 14 hour days at his job and, instead of spending my days as a lonely Hausfrau struggling to get by in Spanish, I am reinvigorating my own work life back in the hustle of a big American city where English is still the principal language. I intend to continue with my Spanish lessons, resume my pie blogging (sorry for my lengthy absence), and, as you can see above, bake more pie. Don’t worry about the husband, he’s still in the picture. Marcus came to LA over New Year’s where we commemorated the good times we spent on the Mexican pecan farm with — there you see it — a pecan pie. I bought the pecans, already shelled and cleaned, from Costco. Here’s to more harvests and more pies of all kinds in 2009. Cheers, everyone. 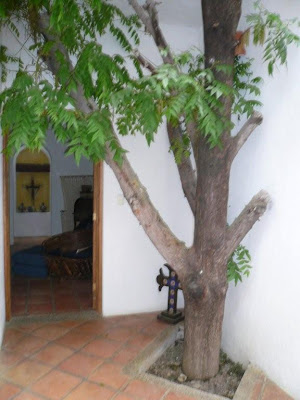 The harvest season is nearing. The pecans were ripening right on schedule (see “Pecans in Progress“) and I was still holding onto my fantasy of being able to pad down the hallway in my bare feet to pluck the nuts off the tree inside our house for my homemade pecan pie (I mean, how much more home-made can you get?!). But disaster struck! First in the form of an almost imperceptible tiny white bug that was causing the leaves to shrivel up and drop, then in a dark brown fungus-like growth that not only covered the remaining leaves but started spreading onto the clay-tile floor. I consulted the manager of the pecan ranch, who happened to knock on the door last week asking if I would sign a petition to stop the Saturday afternoon ATV races on the other side of the ranch. Now I didn’t really mind the ATV races, in spite of the four solid afternoon hours of revving, roaring engines, because at least they were confined to an established track instead of ripping up wilderness areas and terrorizing wild animals, but I signed my name and then asked if he would come inside and have a look at our sick tree. 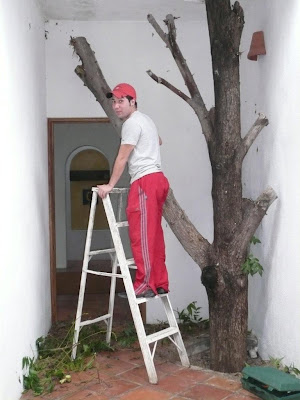 The ranch manager rattled off all kinds of horticultural terms in high-speed Spanish and I just stood there and nodded, clueless. Basically I got that a tree does not belong inside a house, it needs light, and oxygen, and water. I explained to him the tree had survived for five years inside already. Until now. I got his phone number and had my landlord call him to get the full explanation. The next thing I know, Carlos, the landlord’s son, comes over with his pruning tools. And that is the end of my pecan dreams. Well, not really. Because there are about eight hundred more trees outside, including three in my yard, there’s no need to despair. We will still be up to our eyeballs in pecan pie come November.

Also, to soothe our sorrow over the nakedness of the tree, we were assured that the leaves will grow back. “Yeah, like in one or two years from now?” I asked him sarcastically. (We are only here until spring when my husband gets transferred again.) “No, maybe in one month,” Carlos answered. Keeping in mind this is Mexico, where things don’t happen with any sense of urgency, it remains to be seen how the pecan tree will fare. If it was a Type-A New York City variety I might have a little more confidence.

Stay tuned. I will continue to post updates on the progress–of the pecan trees and everything else.