What a day. This may have been one of the best, most memorable days of my entire life. I believe it’s a day many people whose lives we touched on Saturday will also remember for a long time to come. Why? Because of PIE! Free pie! How often do you walk down a city sidewalk and encounter an enthusiastic group of clean-cut people offering you a slice of homemade apple pie? 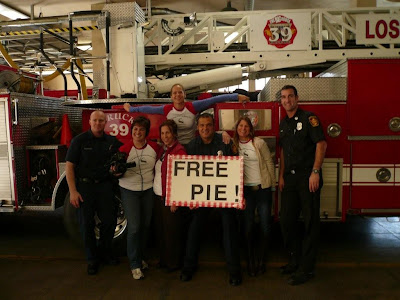 We started off the day at the historic Firestation Number 39 in Van Nuys, Calif., where a group of about 14 hungry firefighters greeted us with great enthusiasm. As we sliced up a few pies one of the fireman pulled out a 5-gallon tub of ice cream. “We have a tradition around here,” he explained. “Any time a rookie has a first — a first car fire, a first cat rescued out of a tree, a first house fire — the rookie has to buy ice cream.” As he shoveled bites of apple pie into his mouth he offered, “But we’ll have change that tradition now. The rookie will have to bring pie.” 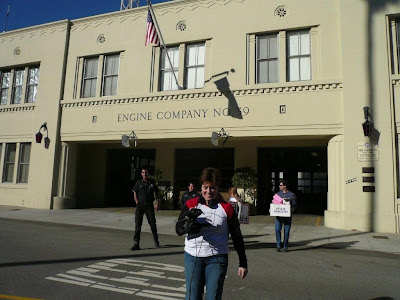 After the pie we got to sit on the firetruck and watch the guys slide down the firepole — and try to show off climbing back up! We also listened to some serious stories about men they had lost, and about 911 calls they answered, about how people open their doors to these brave men who are rush to the scene to help. I got choked up at this point and told the captain, “911 was called when my husband died. I know they did everything they could to save him. So please know I, for one, appreciate what you do.” 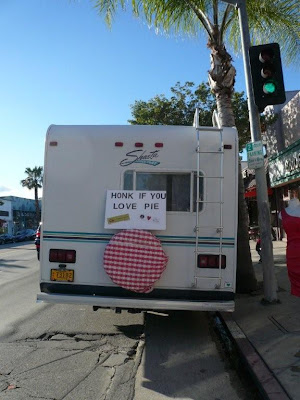 From there we moved on to Sherman Oaks, parking the pie-loaded RV at a random parking space on Ventura Boulevard, from where we set up a table for our Great Pie Giveaway. 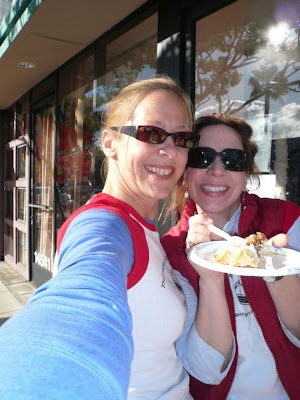 Foot traffic was light so Nan and I (two Iowa girls) used the down time to sample the goods. Very tasty! 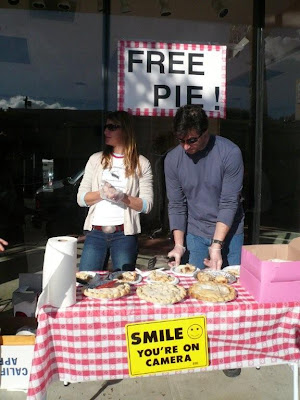 We’re waiting….waiting…..in this city of 10 million where are all the pie-loving people? (Pictured above: my friend Melissa and her boyfriend Jeff) 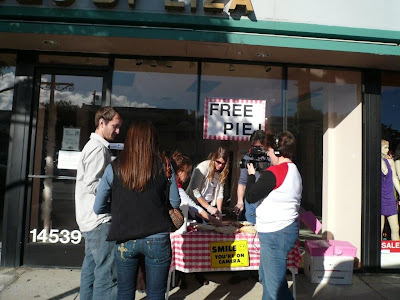 Finally we moved the RV down to Venice Beach and parked on the trendy Abbot Kinney Boulevard.
“Why are you doing this?” was the most commonly asked question.
The answer: “Because it’s National Pie Day.”
This was often followed by another question: “Is there really a National Pie Day?”
To which we replied, “Yes. It’s today.”
Then, still incredulous as to why anyone would be handing out free pie, the next question was always, “Who’s sponsoring you?”
And to that we watched the stunned faces as we said, “No one. We are doing this because we want to give back something the world. We want to make people happy.”
As we watched the forks go in and out of these strangers’ mouths, we also observed the hurried looks softening on their faces. “Mmmmm, this is really good,” we heard. And, “This tastes as good as my grandmother’s pie.” But our favorite comments were ones like: “This makes me want to do something nice for someone else.” One woman said she was going to go home and do the dishes for her roommate. Another guy said he felt so good about the pie he was going to pick up his dog’s poop that day. At that, Janice panned her camera down to a very stocky bulldog. Yikes! We should be giving this guy pie everyday.
This PAY IT FORWARD idea was an added bonus. We just wanted to make people feel good. But to hear they in turn wanted to make others feel good?
This, my friends, is the power of pie!
This is how pie can change the world!
Word traveled down the block as others saw smiling faces carrying plates of pie. If you bake it, they will come. 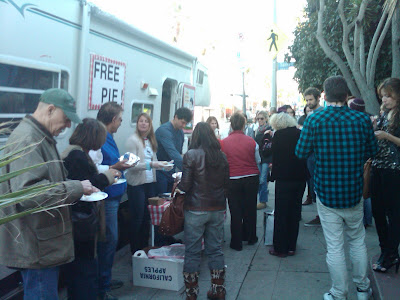 Team Pie — Janice, Melissa, Nan, Jeff, me, as well as Jane, Carlene, Thelma who baked, and Marcus who is with us in spirit — made a lot of people happy that day. And hopefully we have left the world a better place because of it. We’re already excited about National Pie Day next year.