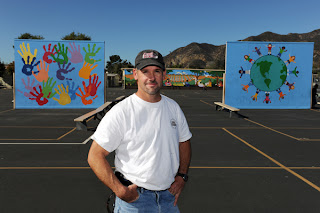 My brother, Mike, is the coolest. He runs a non-profit business called Operation Clean Slate in Southern California, where he paints murals with school kids to fight graffiti. Or as he calls it, a “campus beautification program.” The premise is that kids — or taggers, as graffiti vandals are called — want recognition, even if it’s negative recognition. Even if it lands them in Juvenile Hall. But Mike knew that if the kids painted “authorized” murals they would not only get positive recognition, they would help protect their public art against other taggers.

He learned this when he had a job teaching at Juvenile Hall. He conducted a survey to find out why these kids ended up in, well, kiddie jail. The answer was overwhelmingly graffiti, a national problem which costs tax payers $10 to $15 billion annually. It was either this revelation or the fact that a couple of particularly bad seeds tried to escape and part of their plot was to kill their teacher (Mike) if necessary, that prompted him to leave his teaching job and create Operation Clean Slate.

Check out his new time-lapse video of creating a mural from start to finish. Love the surfer-music sound track!

The point is, it’s been going strong ever since — going on nearly 20 years. His work has evolved to be less about graffiti and more about promoting healthy living. His mural themes focus on fitness, pedestrian safety, anti-tobacco, water conservation, and eating more vegetables.

Now if I can just get him to shift his theme to Eat More Pie.

The LA Daily News just published an article on the positive effect his work is having on the community. I know I’m proud of him and the work he does. I’ve painted on several of his projects and it’s as fulfilling as baking pie and giving it away. Regardless of whether it’s pie or paint, he’s doing his part to make the world a better — and more beautiful — place.

To sponsor a mural, make a donation, or get involved, contact Operation Clean Slate directly.